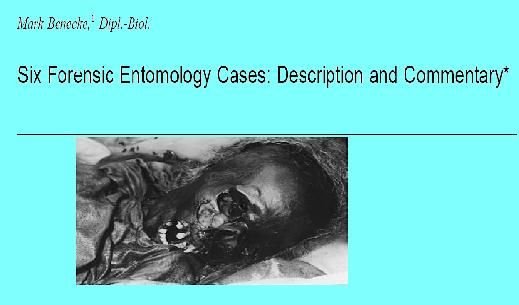 ABSTRACT: Insects are known to be useful in estimating the postmortem interval (PMI). Here several cases are reported which show that a wide range of applications in medicolegal questions and hygiene together or apart from estimating the PMI can be answered by use of forensic entomology techniques, including close observation of larval development. Case 1 describes how blowfly larvae fell from a putrefied corpse, hid, and finally emerged from pupae three months after disinfection and renovation. In case 2, the entomological state of the decomposed corpse of a heroin user is described. Case 3 deals with a single adult Protophormia terrano-vae found in the skull of a partially mummified woman. Case 4 reports the finding of Serratia marcescens bacteria in red Muscina stabulans pupae which were found on a 5-day-old corpse. In case 5, blowfly eggs on the corpse of another heroin user are interpreted as an indication of the decedent being laid outside at night after his death in a flat. Case 6 deals with the finding of Parasarcophaga argyrostoma, which in Cologne might be an indicator species which tells if a corpse was lying outside at least for some time.